This itinerary will lead you on a voyage of discovery in the valleys of the Oltrepò renowned for their vineyards and their wines.

VALLE VERSA: celebrated for its red and white wines. From Stradella, the town of piano accordions, to Montecalvo Versiggia, international capital of the production of Pinot Nero and home to the Corkscrew Museum, and on to Canevino, travelling in the steps of Saint Columbanus.

VALLE SCUROPASSO: wedged between the Valle Versa and the Valle Coppa, its name comes from the oak and robinia woods that cling to the rocky spurs of the Ligurian Apennines descending towards the vineyards of Rocca de’ Giorgi, Montecalvo Versiggia, Montalto Pavese and Pietra de’ Giorgi. At the bottom of the valley, where the plain spreads before us, we meet the Via Emilia and Broni, one of the most important towns in the Oltrepò.

VALLE COPPA: the main settlement is Casteggio, scene of the famous battle of 222 B.C., during which the Roman consul Marco Claudio Marcello defeated the Celts. In 218 B.C. after Hannibal had taken control, the town was razed to the ground. This valley which, like the others, is rich with castles and worthful churches, also boasts the picturesque and charming village, Fortunago, which is included in the club of “Borghi più belli d’Italia”- the most beautiful villages in Italy. 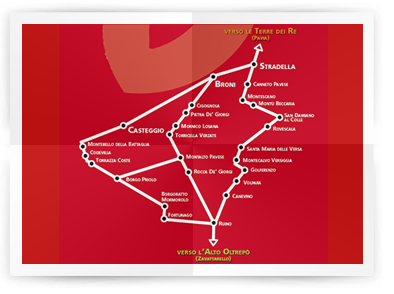