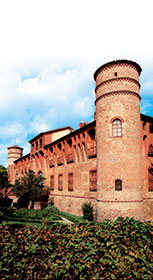 This itinerary will lead you through a landscape that tells the story of this territory and the labours of the people who live there. This area is known as the Lomellina, a mosaic of water and land, a smooth, flat surface where, amidst the sixty thousand hectares of rice paddies, the escape routes are the banks, the walkways that skim the water are the boundaries and the bridges. The perfectly levelled land of the Lomellina is dotted with villages (almost sixty municipalities and adjoining hamlets) and with vast cascine, the typical farmsteads. The history of the area lies in the effort of the people who, for more than one thousand years, have toiled to level the sandy dunes and the boulders smoothed by the flow of the three rivers (the Sesia, the Ticino and the Po), the basins and the valleys, guiding and channelling the streams and canals.

A fertile land generous with numerous varieties of quality rice, asparagus, beans, red onions, pumpkins, frogs and salami, all gourmand agricultural products. This substantially manmade landscape is surrounded by natural habitat – such as the Ticino park – where the original ecosystem is being gradually restored, thanks to projects for the conservation of botanical and faunal biodiversity. Tradition, nature and culture (the Lomellina is a treasury of Romanesque and Renaissance art and architecture: historical towns, castles, ancient villages and churches) and history (for significant stretches the roads follow the steps of the pilgrims on the Via Francigena and its fertile fields were also the unforgotten battlefields during the Risorgimento). 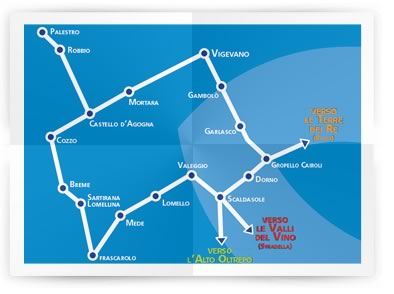